The weather was nice, but not as hot as it usually is by this time of the year, and also the spirits were high. We met early in the morning, and drove off to the mountains. After parking and a short walk, we reached the start of our climbing path, and started securing us with harnesses and ropes.

The mountain we climbed: the 'Sierra de Lúgar'.

Minutes later, we started climbing, and but only after a few meters, two of my friends feared that they would not be able to make it to the top, and decided to abort early, before they got stuck and unable to go forward or backwards. I have to confess that I also hesitated, as I am not in a too good shape, but in the end I decided that I would give it a try, and see how far I was able to go. 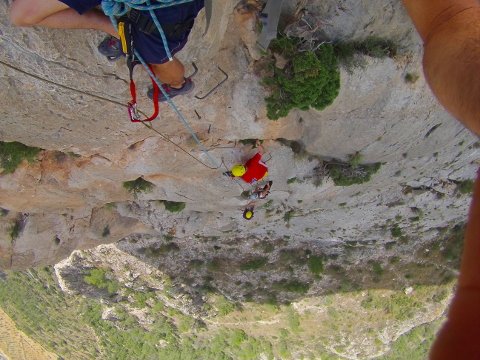 But in the end, I was able to make it to the top. It took me a hell of an effort, but I had a lot of fun, it was like I was a kid again, and I climbed to the trees in my neighborhood. My only worry was going back down again: at some point, our guide started talking about the rappel down. I had already rappelled one, but I did not like the experience too much. During the final phase of the climb (the perfectly vertical wall you see in the picture above), I was hoping that there was some path going down from the summit. And actually, there was one, but in the end I just shrugged, and rappelled down as anyone else. 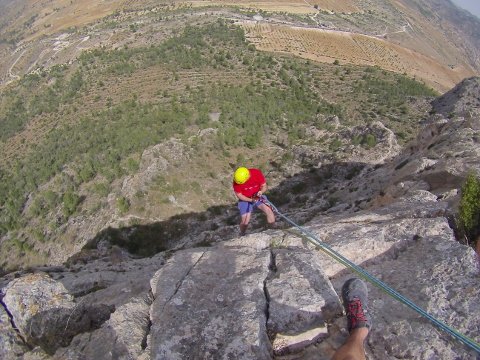 ... and rappelling back down again.

And actually, this time I loved it too… maybe because of the company, maybe because this guide was better than the other one. Or whatever. I just loved it. Both of the two lengths we had to rappel down.

After we were finished, I felt a little as it was over. But I was also completely exhausted. My knees did not respond any more, so it was probably for the best that it had ended. And actually, my body has been sore for full three days after the experience. But I don’t regret it. Not for the tiniest bit. In fact, I would love to do it again! :)