Time for some housekeeping.

I have lived in my flat for about three and a half years. I moved in a few weeks after they finished building it and started giving out the keys to the owners of the flats.

As it is a relatively new construction, it is subjected to some of the latest laws about construction that have been approved in Spain. One of those laws says that any newly built building needs to have solar panels on its roof to take advantage of our sunny climate to help saving power in heating water.

Thanks to this, I have saved some money, since in summer I do not use any power in heating water: I just switch the heater in my home to the circuit connected with the solar panels in the roof, and I have free warm water for several months. In autumn and winter I just turn on a small controller which automatically switches to the roof’s panels if they are hotter than the water in my heater, of turns on the heater if the water on the roof is cold. 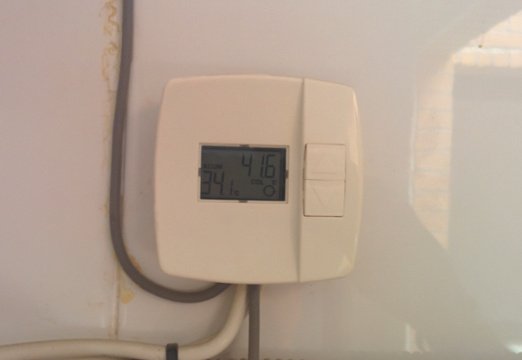 The temperature controller that compares temperatures and switches the flow.
Now, the water from the roof (41.6 ºC) is hotter than the water in the heater (34.1 ºC).

But, a few days ago I noticed the system was not working right, as the previous day had been nicely warm and sunny, but the water that came out of my shower was quite cool.

I have had a look at the actuator that controls the flow of water, and looks like that the motor that switches the flow has broken down.

I have googled for a similar one, and I found it, but it was not exaclty cheap:

The valve with the actuator.

I tried to find the same model on other internet sites, and I found the same prices in other two sites. So no luck on finding it on a cheaper store.

As my valve is already fitted to the plumbing in my flat, and it is working fine (I could check it by manually switching the valve), I also tried to find only the actuator, without the valve. I found it at the bottom of the same page, this time, just for 26.02€, plus shipping.

Cheaper, but could still be improved.

Armed with a screwdriver, I opened the actuator’s box, to see what is inside, and to see if I could find something notoriously wrong, and maybe fix it, or replace it. All that I found was just a synchronous motor, and a metal frame with spring mechanism to keep the valve in a a “default” position when the power is off. 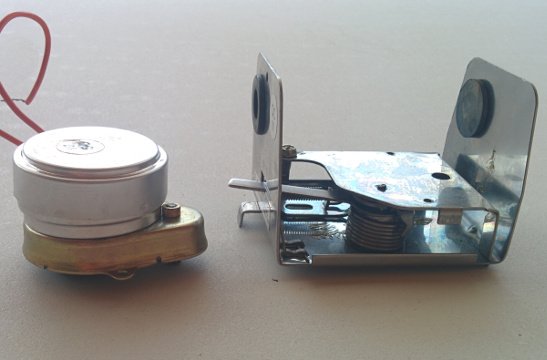 The synchronous motor (left) and the spring mechanism (right).

The spring mechanism is quite simple, and the spring was still strong, so the problem had to be in the synchronous motor. I tested it by connecting it to a power cord, and plugging this into a socket (of course, first I checked that it is intended to work with this kind of current!), and I confirmed that this is the broken part of the mechanism.

After that, it was only a matter of finding a similar motor. I found it on ebay. Its price, only 9.50€ (plus shipping, of course). I ordered immediately.

Now I just need to wait a few days until I get the replacement motor, and then I can mount it on the frame and fix my controller. In the mean time, I will have to manually switch the flows between the heater and the roof.